A life in Letterpress

World renowned typographer, designer and letterpress practitioner Alan Kitching is currently exhibiting at Snape Maltings, Suffolk where Jodie was lucky to have the opportunity to see the man himself give a talk. Here she reflects on her visit.

Alan looked like a designer – well dressed, hair and moustache just so, and those thick rimmed glasses that’s so characteristic of a designer. His work is just amazing and I was quite in awe. With my educational background having a more hand rendered and print making approach I already had an understanding of the time and effort involved with creating each of the artworks on display. Each piece has its own story, its own concept and, most importantly to Alan, a logic. You can’t just make things up after all!

Explaining his Hamlet poster you could clearly see that Alan took inspiration from the film, with the red letterforms representing the young Hamlet, whilst the smaller white lettering represents the ghost of Hamlets late father. As is the nature of letterpress – it can take a few attempts to get the print just right. When asked: How do you know when a ‘happy accident’ is a mistake or a piece of art? Alan replied with: "Acceptance is key, you don’t interfere with the art or the pieces of type".

I had the pleasure of asking Alan what had been the most challenging commission he’s worked on to date and he spoke of a recent project involving a large hoarding around a London building. "The challenge was working with local school children to create the artwork. Whilst they were so sweet, the workshops were complete chaos – it took three months in total to complete".

To have an insight into Alan's background, design theory on particular pieces and an understanding of the processes involved with particularly technical artwork was truly inspiring. "Even with a limited amount of letters, you can create a wonderful thing." 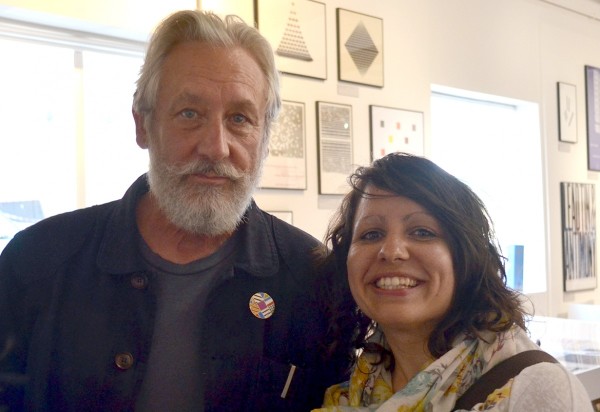